The most controversial feature (as measured by our company's internal squabbles) was the addition of the puzzle timer.  Should a player be allowed as much time as they want to come up with an answer, or should we put a cap on how much time they have? 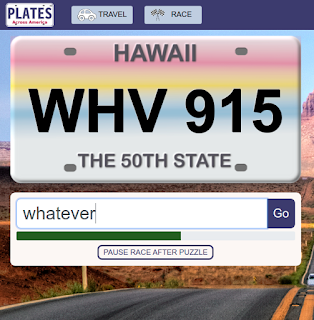 The designer that came up with this idea felt that a timer was essential to improving the game play.  She felt like tough puzzles was causing her to get frustrated. Her personality was such that she was not willing to give in to defeat, so would continue to stew on an answer and get more and more frustrated.  She felt that it would be a relief to be forced to move on after some time.
On the other hand, many of our early test players enjoyed the more leisurely pace of the game and having time to think.  Since the game has you traveling the country, shouldn't you be in control of when you travel, where you go and how fast you get there?
Both of these "camps" had very good arguments for their positions.  We were not going to add the feature until we were completely convinced it was important, so we sat on the idea for a long time, reconsidering it often.  This debate began prior to our initial release, and went through many months after our initial launch (March of 2020).
As we discussed in a previous article, when we launched the game, we only offered a single-player option, then began working on the two-player "Race" game a couple months after launch. The puzzle timer question lingered.  However, about half-way through the design of the Race game it had become fairly clear that the timer was going to be essential for the two-player game.

Why the Timer Matters

Suppose you like the game, but since have a busy life, the amount of game play time you have is limited.  Suppose you have an independently wealthy friend who also likes the game. With much more leisure time on their hands, your friend will have a distinct advantage if they race you: they can contemplate answers for much more time than you can. 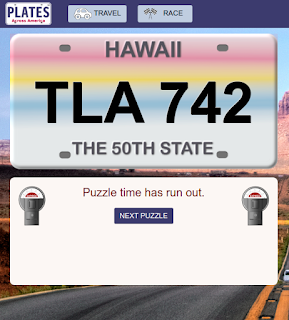 The timer levels the playing field, while also putting a cap on how long a game is going to last.  Thus, it provides both fairness and predictability, both of which we felt were essential in the race version of the game.
Once we committed to the design and engineering effort to add the timer feature for the two-player game, we had no choice but to revisit this question for the single player game.  We ultimately decided to leave the timer out of the single player game. Since our internal factions were so divided, and since we felt the general population could have similar sentiments, providing the choice of un-timed single player mode and timed race mode could keep both types of players happy.

Have you ever tried to interrupt someone while they are in the middle of a time-based game? The reaction you get can be a function of the person's personality, but it can often be less than civilized.  From the player's perspective, life does have a way of making "things" happen, and you might need to interrupt the game to take care of such "things".  It would be a better game if you did not have to choose between tending to life and winning a game. 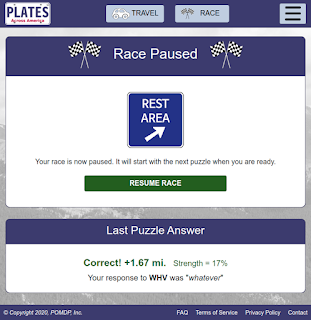 To address these concerns, we added the ability to pause the game.  This game pause does not happen immediately though, but only after the current puzzle.  This was done to guard against a player using the pause function to gain an unfair advantage. We are not 100% enamored with the current design of this feature, so we may revisit this, but for now it provides the main pausing function we felt we needed.

Once we committed to adding a puzzle timer, the obvious question is, "How much time should a player get for each puzzle?"  Originally, we had no idea.  We started with 25 seconds and this nearly led to riots.  If you are an adrenaline junkie, this might be your sort of game, but we unleashed 25 seconds on a set of beta testers that were more of a meticulous, laid back mind-set and who were also used to the original version and having all the time in the world.  It was a brutal culture shock for them.
The most obvious place to go from there was a 1 minute timer.  This turned out to be a fair amount of time: enough to let you think and reconsider, but not so much time that you do not feel any time pressure.

A final note about that stress-inducing 25 second timer we experimented with: we are contemplating making this a game option. We would call it something like "Sprint" mode and it would definitely liven things up a bit. We are not sure how much demand there might be for something like this, so if you think this would be of interest, please let us know.
Happy Travels!
Posted by Plates Across America at 11:10 AM