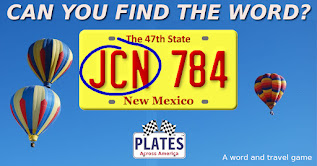 We've been quiet the last couple months with regards to postings about Plates Across America®. We have been actively working on a major redesign of the game and it turned out to be a fair bit of work, complete with periods of "writer's block". We had lots of ideas for the game, but at times struggled to put them together into a coherent game story.

The initial idea we had for Plates Across America® was to combine solving license plate letter puzzles with the feeling of driving across the USA. Our first version of the game wound up being predominantly about the puzzles and it did not give a player a good sense of traveling. The first version was also too open-ended, requiring the players to determine what their ultimate goal was. The next version of the game seeks to solve these shortcomings.

The general shape of the new game will be to “complete” the game, where completion will be defined by the goal of having “visited” particular places across the country.  A player will progress through “levels”, where each level will have a smaller goal of travel-based achievement. Traveling will still be done by solving the word puzzles, but there will be more emphasis on acquiring a collection of places visited to meet the goals. For example, when you have visited your 10th National Park, you will move to the next level.

Posted by Plates Across America at 6:50 PM No comments: