It's a Small World

In the early days of our game development at Plates Across America™, like many software companies, we relied on our friends and family to help test early versions. One of the more engaging aspects of playing in this small universe of people is that you personally know everyone appearing in the leader boards.
While we were enjoying the close-knit nature of the early versions of the game, our game designers began to worry that this element would be lost once we reached a certain number of players. In any game with a large distribution, there are always people that wind up being on a different level than everyone else. If you have a million players, how many are going to care to look at the leader boards besides the handful of people that have any chance of being listed there?
The design solution we came up with to address this issue was to allow you to filter the leader boards to only a select set of chosen people. This requires being about to find and "follow" people to build up the list of those you are interested in. Adding the ability to find and manage a list of users is no small development effort. If you have not written or designed software before, then you might not appreciate the level of effort required to add something like this, though it sounds simple on the surface. 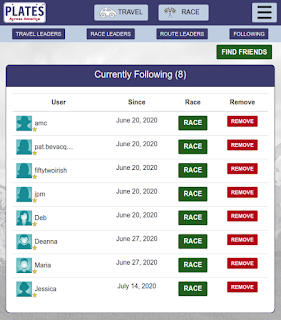 This was a sizable body of work we identified before we had even launched our game. Since we figured it was more important to focus on getting the first 100 customers before we starting to worry about the millionth, we shelved this idea of "filtered" leader boards for a while.
If you read our previous article on issues we faced when we introduced the two-player race mode, you will have noticed that the race feature required this same need to maintain a list of people you are following (so you can more easily locate race partners). It was this shared need of the "follow" feature which made it no coincidence that the race feature and filtered leader boards feature launched at the same time.
To use this feature, you first find and/or invite friends in the game to build up your "following" list. Then, when you visit the leader boards, you can select the drop-down menu (top left) to show only those you are following. The game remembers this choice, so all leader boards will filter down to your list unless you switch the view back. 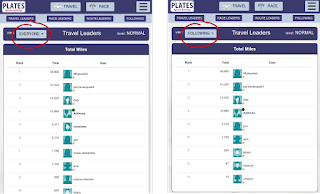 Another useful feature we have added is to put a yellow star next to the users you are following so you can quickly identify those people you are most interested in. If you play the game and have any feedback on this feature, please let us know.   Play Plates Across America
Happy Travels!
Posted by Plates Across America at 3:22 PM