In Plates Across America®, we want the game to give players a true sense of traveling. We've added a number of features and visuals to help achieve this, including the route number signs you would see as you traveled. This was a painstaking process of both creating the images and assigning the proper route numbers to each portion of each route.

There are 3 main levels of route number signs in the U.S.

When considering national, state and county road signs, we ended up with 68 variations. However, this is just the number of different "styles" of signs and each of these can have hundreds of different route numbers appearing on them. If we were to create a different image for every possible combination of style and number, we would need to create many thousands of images. Just creating the 68 styles would be time consuming enough for us.

Our solution to reduce the number of images was to use a Scalable Vector Graphic (SVG) for the style and then use the SVG layering ability to drawn text characters on top of it for the route numbers. The route numbers could be anywhere from 1 to 4 characters, so the font size and position would need to be adjusted depending on the number of characters. Fortunately, the SVG format gives some help in allowing us to do this, so it was less tricky than it could have been.

The other big consideration that the SVG helps us solve is web site responsiveness. Scaling images and especially fonts to all the device sizes out there is important for the game's playability.

Plates Across America® has nearly 350 different routes, however, these are the game's concept of "routes" which are not the same as real life routes. In fact, a single game route may traverse many different (real) route numbers. We needed to go through each of the game routes and find all the route numbers that have to be assigned for each segment of the route.

We used Google Maps to find the real-life route numbers and our internal route editing tools to encode them in the game. Interestingly, Google Maps has a similar problem in showing route numbers for states and counties, though they chose *not* to use different styles for each state like we do. When you look at Google Maps, round circles are state route numbers, while square route numbers are county roads: this is true for all states.

When we encoded the route numbers in our editing tools, we used a convention of combining the "style" (e.g., state) and the route number. For example, "i-95", "tx-2222", "ca-1", "county-34a".  Our software would then parse the style from the number, choose the right style SVG and then render it with the text of the route number depending on how many character were in he route number. In order to have the number fit into the image boundary, we have to scale down the font size more for a 4 digit route number than for a single digit one.

We put quite a lot of effort into these route number signs even though they are not a major part of the game. However, we felt that in order to recreate a real sense of traveling in the game, a lot of these small and subtle details needed to be included.

If you have not tried our game before,

Try Plates Across America® for free. 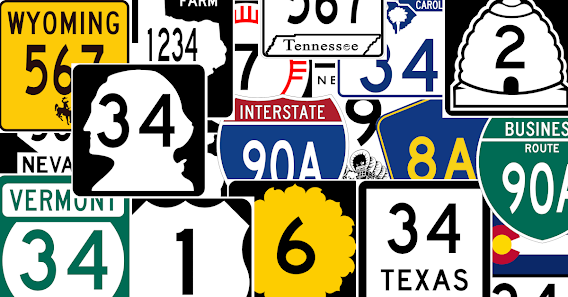 Posted by Plates Across America at 8:57 AM