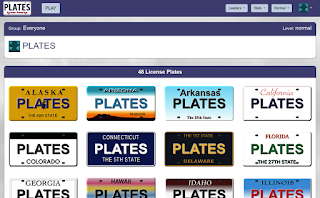 Want to know how Plates Across America™ decides which license plate to show in the game? If so, then read on for all the nitty-gritty details. First, we will give you a some hints on some upcoming features since they are directly related to what we are about to explain.

Every state (and D.C.) can have multiple license plates. Further, each license plate has two important attributes: 1) what years the license plate was in use; and 2) how common was the license plate during that time.  In our early versions of the game, neither of these two has much of a factor since we only have a single plate for each state. However, we are working on extending the set of license plates in the game and will be working this into some interesting new route concepts.

With that as some background, when a new puzzle is displayed, exactly what happens to decide which license plate to show? First, we look at your current location.  Most of the time, you get a plate from the state you are in (and eventually the "time" you are in).  If there is more than one plate for the state (and time), then we'll randomly pick one based on how common it is. To simulate what you might experience in the real world, we do not only look only at your immediate location, but a few mile radius form where you are.  When you travel (for real), as you near the borders of states you tend to see plates form the neighboring states more often then if you were in the interior of the state. In the game, the likelihood of seeing a plate from the current state or neighboring state depends on how close you are to the border and the relative populations of cities in that area.

Looking at your current location is what happens most of the time, but not all of the time.  Ever see a car with an out of state license plate from far away? We simulate this in the game by occasionally picking a state from all the other states.  In the real world you are more likely to see plates form places like New York, California, Florida, Michigan, etc. because those places simply have more people and are more likely to be visiting your state. It is much less likely to see a plate from North Dakota given how few people live there.  Therefore, when the game does decide to pick from other states, it does so based upon the relative populations of the states.

So there you have it, the full details of how the license plates get picked in Plates Across America™.


Posted by Plates Across America at 9:18 PM