Earn Travel Goals to Win in Plates Across America®

As you play Plates Across America®, you can win the game by reaching a series of "Travel Goals". Examples of Travel Goals are:

There are 12 types of Travel Goals: 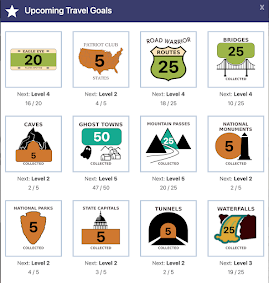 If you do the math, there are 96 possible Travel Goals in the Plates Across America. Because the game has many routes to choose from, the routes you choose will dictate which travel goals you can achieve. When designing the game, we did not want "winning" the game to consist of reaching all 96 Travel Goals. We wanted to give you choices about what routes to travel, not to require you to travel all of the routes.

The game also has a leader board to show who has reached each Travel Goal first. If we required reaching all the Travel Goals to win, then everyone would need to take every route, with no freedom to choose how they want to win.

Therefore, we designed the game so that you only need to reach a subset of all those goals to win. Specifically, we require 63 goals to win the game. Why 63?

We wanted to provide a fun, visual representation of a player's progress in the game. Sticking with the "America" theme, we landed on using the American Flag. Each star and stripe represents one of the Travel Goals, and that is where the game winning number "63" comes from (13 stripes + 50 stars = 63).  The flag starts greyed out and the color changes as you reach each travel goal. When you win, the flag will be red, white and blue. 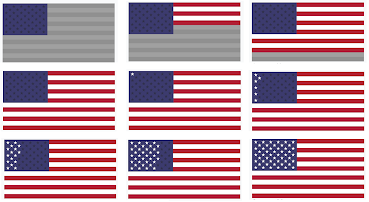 In case you are thinking of asking: yes, we would have to revise the game if more states were added to the union.

Although the U.S. Flag Code is included in Federal law, it is not mandatory, uses non-binding language and prescribes no penalties for violating it.  Thus, it is more of a suggested "guideline" than it is an enforceable "law". While not being fined and not having the threat of jail time is a comfort for us, we still do not want to offend anyone: we just want to provide a game that is fun to play and we are not in the business of making political statements.

Whether we are being disrespectful according to the U.S. Flag code depends on how strictly someone wants to interpret it. Ever see an American Flag in a Budweiser commercial or on one of their beer cans?  Ever use a paper napkin or plastic cup with a flag on it at a Fourth of July party?  Ever seen an American flag patch on a baseball player's uniform? These are deemed disrespectful and against the rules according to a strict interpretation of the U.S. Flag Code.

In our experiences, people do not seem to be offended by many common uses of the flag that could be considered in violation of the U.S. Flag code. How many people even know that using a flag on a paper napkin is contrary to the U.S. Flag code?

Therefore, we have chosen not to follow the strictest interpretation of U.S. Flag code. Even the American Legion, who were the drivers of establishing the U.S., Flag code (in 1942) had this to say about the use of the American flag in clothing even though the code forbids it:

“People are simply expressing their patriotism and love of country by wearing an article of clothing that happens to be red, white, and blue with stars and stripes."

In the same spirit, Plates Across America® uses the American Flag as part of our game's theme with the aim of celebrating the excitement of traveling the many wonderful places across the United States of America.

When you reache 63 travel goals, you have won the game. However, if you are inclined, you can continue playing. You can travel all the routes and reach all the Travel Goals.

If you have never tried our game before, please try it out here:

Happy Travels!
Posted by Plates Across America at 8:05 PM